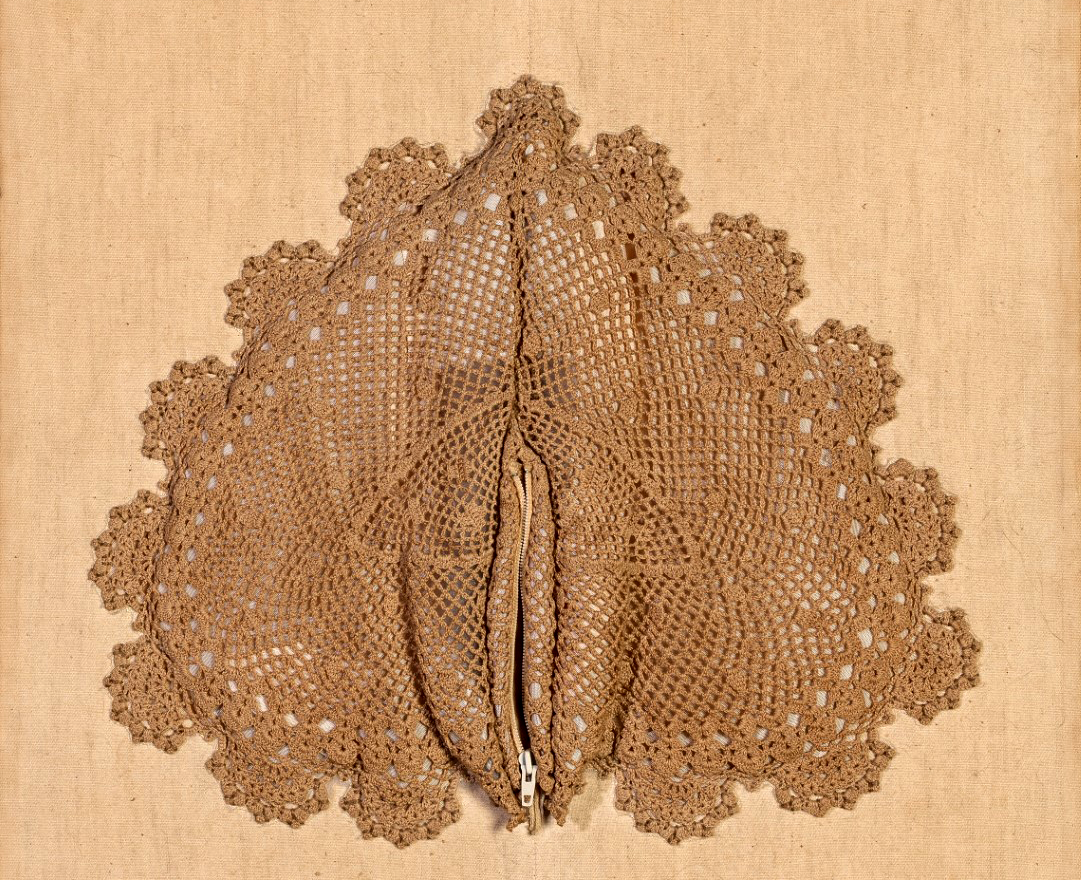 Early in 2019, The Women’s Library received an inquiry relating to a possible donation of visual art and feminist theory books from the collection of the late Sydney and Adelaide based artist Frances (Budden) Phoenix (1950-2017). I’d only recently had the good fortune to view a fairly well known work of Frances’ in Melbourne at the Australian Centre for Contemporary Art in late 2017, the delightfully provocative embroidery entitled the Queen of Spades, 1975 (previously known as Kunda, 1976) and pictured therein. The work was a part of ACCA’s 2017 exhibition, Unfinished Business: Perspectives on art and feminism. Little did I know then, as I laughed inwardly at Phoenix’s playful appeal, that my connection to Frances would grow considerably in a short while.

It was Frances’ sister Sally who inquired if The Women’s Library would like to house Frances’ art book collection. If you’ve read my previous article showcasing the merits of our Art History/ Theory Collection you can imagine I did a little backflip when I read her email. So first of all allow me to thank Sally on behalf of all the volunteers and future readers of Frances’ books for her generosity in donating the collection to The Women’s Library. They are in good hands.

What’s exciting about ‘right now’ – this age of information that we currently find ourselves in – is the dearth of information that is now available online and in digitised online records. Documents, journals, self-published books and zines that have previously been hidden from plain sight are available online through library catalogues or are referenced through Trove. This means that when (it’s going to happen sooner or later) you become interested in feminist art from 1980s Australia, you’re not hitting against the proverbial wall of the patriarchy. It’s out there somewhere; on a database, in a handmade femme zine from 1984 or Trove has some idea as to what you’re talking about.

What is this feminist art you speak of? Can you spell that?

I’m joking, Trove, I love you. As much as any human can love a digitised database.

Frances Phoenix was known for her provocative textile and needlework, studying at Alexander Mackie and The National Art School in Sydney and contributing to Judy Chicago’s infamous ‘The Dinner Party’ in 1974. In 1975, International Women’s Year,
Frances asserted that she became a lesbian, a feminist and an artist, proclaiming all as “political acts for women”.

A particular favourite work of Frances’ is her poster ‘Victory’ (1979), housed by the Jessie Street Library in Ultimo. Satirising war propaganda posters of the various world wars a woman stands in uniform, the female symbol emblazoned on her overalled chest, holding a gardening hoe and brandishing a basket of produce- “Grow your own Grassroots Defiance
Against the Capitalist Diet” she proclaims presenting a “homegrown diet as a challenge to both capitalism and the patriarchy”. I find this more captivating than old Rosie the Riveter. And her particular form of visual provocation is both alluring and sensual but also stands in powerful defiance.

The library now holds in it’s collection a copy of Lucy Lippard’s The Dematerialization of the Art Object, Whitney Chadwick’s Women Artists and the Surrealist Movement, and many more monographs of Women artists or artists who happen to be Women – depending how you want to phrase it. I’m looking forward to reading Lippard’s text on German artist, Eva Hesse. You’ll know you’re reading one of Frances’ books because she diligently wrote her name on the inside sleeve all her books. This little personalised touch makes me feel a little closer to her and her work; to everything that she stood for, her achievements as an artist and as a Woman and activist. It is both a privilege and honour to be a recipient of such a collection and we hope you’ll enjoy it. The Frances Phoenix collection is now on the shelves on The Women’s Library.

————-
Dr Louise Mayhew from the University of Griffith has written quite extensively about Frances Phoenix and if you’re interested in finding out a little more about her you can view her article here on the Jessie Street Women’s Library website.

————
The Frances Phoenix Collection in The Women’s Library is easily identifiable as we have posted a special ex-libris (book plate) inside each cover or front page.

————-
Frances Phoenix at the Art Gallery of NSW